Posted on Nov 08, 2021 in Chatham-Kent Celebrations

Freedom is not Free! Many veterans have given their lives to protect the freedoms we enjoy. Thursday, Nov 11 at 11 A.M. stop and have a moment of silence to commemorate the signing of the Armistice that put an end to World War  1.
On the 11th hour of the 11th day of the 11th month, the war ended after 4 terrible years of warfare between the Germans and the Allied Troops. Called Armistice Day, it was later renamed Remembrance Day after World War 11 to commemorate soldiers from both wars. November  11th, it is a day to remember all fallen soldiers.
The Legion members sell Poppies each year as a way for the public to visibly show respect and honor for those heroic men and women who gave up so much and died so others could be free. The Red Poppy is traditionally worn by men on the left side of the chest, The place where a military medal would be worn. Women wear them on the right side, where fallen husband's medal would be worn. Many do not know why we wear the Bright Red Poppy on and around Remembrance Day. It has become a symbol of this special day for a reason.
Flanders, in western Belgium was the region of some of the most concentrated fighting during World War 1. As a result, many signs of life were destroyed. The Poppy, however grows in disturbed soil and can lie dormant in the ground without germinating. The spring following the end of the war, as warm weather returned, the Red Poppies appeared.
John Mc Crae, a doctor serving in the Canadian Armed Forces overseas was inspired by the sight of the Poppy Fields
and wrote the now famous poem 'In Flanders Field' As a result of the poem being published and its International acclaim, the Poppy became the symbol of the fallen Veterans lost in Battle. Buy a Poppy, wear it proudly and take a moment out of your busy day on Thursday, Nov.11/2021 to remember those who gave so much so that we and others can enjoy our precious freedom. 2021 marks the 100th anniversary of the 'Poppy" 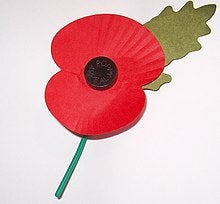 Volunteers are not manning the donation sites due to Covid restrictions this year. However, there are 250 boxes distributed to various stores and organizations throughout Chatham-Kent. Stop and donate to the Legion' s Poppy Campaign raising money to help veterans and their families. At this unprecedented time, more than ever, our support is much needed since many of the legions around the country have suffering financial losses due to closures.
Thanks to the lifting of some pandemic restriction, visitors and residents of CK will once again be allowed to honour Veterans at the Chatham Cenotaph on Remembrance Day. Canada's veterans will be celebrated with a march from the Chatham Armoury to the Cenotaph on King St. via the foot bridge at Tecumseh Park. The Veteran Walkway will be blocked off for the ceremony taking place at 11 A.M.
Remembrance Day celebrations are are also planned for the Bradley Centre on November 9. Guests will attend the traditional laying of the wreaths and the indoor parade, followed by a special dinner for veterans and families. The event is not open to the public but will be televised on Cogeco on November 11.
Come out and attend the November 11th celebration in downtown Chatham or sit with your families, reflect on the events of this special day and pass the torch of this great celebration of our history and those who fought for our freedom on to the next generation. " Lest We forget"
Chatham- Kent is a caring community and I am so proud to be a part of this great municipality and all the special people in it.